A six inch humanoid body was discovered in the Atacama Desert in Northern Chile and scientists are stumped as to the origin of its nature.

Scientists at Sanford University are investigating the remains of a strange humanoid, as well as working on funding an expedition to the Atacama Desert in Chile to locate more specimens. The corpse is six inches in height, has ribs similar to the human body, a large skull and chromosomes that have a 91% match of human DNA. This according to a July 8, 2013 article posted on the Collective Evolution website.

Collective Evolution reported, that "[research] has already determined that a large portion of its DNA is from a human female, presumably the mother. The astonishing thing is that 9% of its DNA is unmatched, this is a very large portion of DNA. What could it be? Researches don’t know yet, and it will take a number of years to determine exactly what that unmatched DNA represents."

The discovery caused a frenzy of conspiracy theorists to speculate an origin not of this world, but the jury (real science investigators) is still out. The video attached to the article said similar creatures have been found in Puerto Rico and Russia. One was captured alive back in the 1990's in Russia., It lived for a short time and its remains were taken by the Russian security service, never to be seen again.

The iRumor Mill is following this iRumor and will post findings here if anything develops. 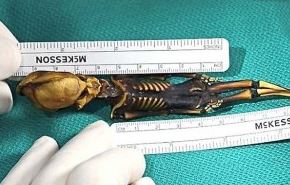