Four Blood Moons - Is it the Beginning of the End?

The Earth will witness four blood Moons during the Jewish feasts of Passover and Tabernacles in 2014 and 2015. In the past, when there have been 4 Blood Moons like this, there has always been some sort of grand event on the planet, mostly involving the Jews.

In 1491 and 1492, on each occasion of those Jewish feasts there four Blood Moons. During that time the Jews were exiled from Spain and Christopher Columbus discovered the New World, which led to an eventual home for the Jewish people where they could freely practice their faith.

In 1948 and 1949 there were four Blood Moons consecutively on Passover and Feast of Tabernacles. The events around these Blood Moons were the Holocaust and the declaration of Israel as a nation.

In 1966 and 1967 there were four Blood Moons and from June 5th to 10th in 1967 marked the Six Day War where Israel’s decisive victory won them the Gaza Strip, Sinai Peninsula, Old City of Jerusalem, West Bank, and the Golan Heights.

Now the Internet is loaded with Blood Moon Conspiracy Theories alleging that the this is the big one and the end times are approaching.

"Blood Moon" gets it name from the color of the lunar surface during a full lunar eclipse. The Earth is between the Sun and the Moon and the light from the Sun's corona is reflected onto the away from  the moon's surface by the Earth's atmosphere. Our atmosphere bends the blue rays of the sun so only the red light rays make it to the lunar surface.

Tetrad is a series of Blood Moons that occur on the feast Passover and Tabernacles (or Sukkot) two years in a row. In other words, a full lunar eclipse on each holiday, two years in a row. What is intriguing about this Tetrad is that there will be a full solar eclipse between the four blood moons on March 20, 2015. The solar eclipse is predicted to be be visible in Europe, North/Eastern area of Asia, North/Western parts of Africa, Western areas in North America, Atlantic, and the Arctic. 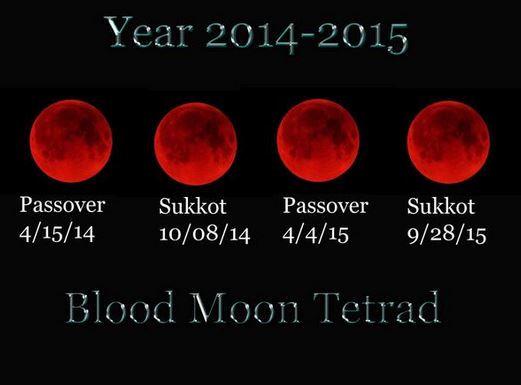 Some of the conspiracy theories surrounding the Tetrad are warnings that the Rapture will take place after the last Blood Moon in 2015. The Rapture is when all the Christians on the planet are taken up to meet Jesus, in a twinkling of an eye. This is an event that many Christian students of the Bible believe will begin the 7 year Tribulation, literally Hell on Earth and eventually the end of days.

The "Rapture/Tribulation" timeline is not clearly defined in the Bible so there are three basic interpretations, pre-wrath rapture, mid-Tribulation rapture and post-Tribulation rapture. That means that Christians believe that they will be caught up in the air to meet Jesus either before, halfway, or after the tribulation period of 7 years, which is described in the last book of the New Testament.

There are many resources available on the Net to study the prophetic writings of the Bible and we found the most detailed information to come from the archives of Chuck Smith at Calvary Chapel. Recordings are available for all to hear at no charge via MP3 download or audio stream at the Word for Today website.

End time events are predicted in various books of the Bible. Scriptures suggests watching out for signs in the sky and say one of the key signs that the end time is near is when the Jewish Temple in Jerusalem is rebuilt.

As for predicting the day and time of the Rapture, or even the return of Christ, Jesus himself told us, "But of that day and hour no one knows, not even the angels of heaven, nor the Son, but the Father alone." -Matt 24:36 NASB