Reports alleging that Boyd Bushman, a former senior scientist for Lockheed Martin, recorded a video shortly before his death to tell the world about his work at the top-secret facility known as Area 51.

The video appeared on social media in October 2014 and shortly afterwards went viral, but the information presented is sketchy and remains to be unproven. The photographic evidence presented in the video is highly questionable as well.

One portion of the video shows a photo of a dead alien from the planet "Quintumnia," which caught our attention because the body was not being handled by a person wearing latex or rubber gloves, a standard hygienic protocol for anyone in the scientific and medical community when handing specimens. The Internet investigators at iRumormill.com swept the Web to discover that the questionable alien corpse did not visit us from Quintumnia in a faster than light space ship. An alien doll with the exact same featurs can be obtained at any local Walmart. 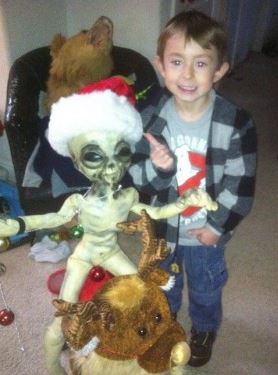