Muslim Judge, Carolyn Walker-Diallo,  Handpicked by Obama and Sworn in with Quran

Viral reports of a female Muslim judge, Carolyn Walker-Diallo, who was hand-picked by President Obama and sworn in to serve on the bench of the 7th Municipal District in Brooklyn.  The new judge chose to take her oath of office while holding a Quran. 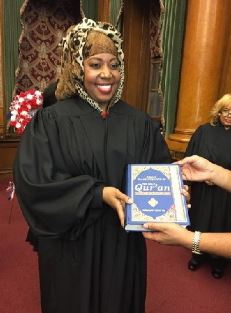 Carolyn Walker-Diallo, was elected judge in November 2015 for the Brooklyn 7th Municipal District. As a testament to her Muslim faith she took her oath of office using a Quran. This according to a December 17, 2015 article by the New York Daily News. President Obama did not "hand pick" Walker-Diallo. Municipal district judges run for office and are elected by popular vote.

The Daily News reported that "Walker-Diallo is not the first officeholder to be sworn in on the Koran: In 2006, Minnesota Rep. U.S. Keith Ellison did so."

Sign up for the iRumorMill.com Free Alert System - Find out more by clicking here