Reports that New York City Mayor Bill de Blasio and other city officials urged New Yorkers not to eat at Chick fil-A because its owners owners support groups that promote "hate" against gays. 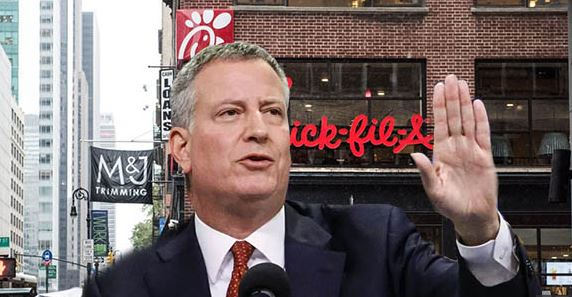 New York City Mayor Bill De Blasio did urge citizens to stop eating at Chick Fil-A after the company announced the opening of a fourth location in Queens. This according to a May 5, 2016 article by Fox News.

The Big Apple's progressive mayor sent out a statement saying, "This group imparts a strong anti-LGBT message by forcing their employees and volunteers to adhere to a policy that prohibits same-sex love.  It is outrageous that Chick-fil-A is quietly spreading its message of hate by funding these types of organizations."

Fox reported, "Chick-fil-A responded by pointing out that it has 80,000 employees of all different backgrounds and beliefs and prefers to focus on its food and service."

A company spokesperson told Fox, "The Chick-fil-A culture and service tradition in our restaurants is to treat every person with honor, dignity and respect — regardless of their beliefs, race, creed, sexual orientation or gender."

In a May 10, 2016 follow up article, Fox reported that the mayor plan may have "backfired."

The company is planning "12 new locations are expected to pop up around the city over the next year."