President Eisenhower Met with Aliens in 1954

Conspiracy theories alleging that President Eisenhower met with a "grey" alien in 1954 to negotiate a deal of human abductions in exchange for alien weapon technology. 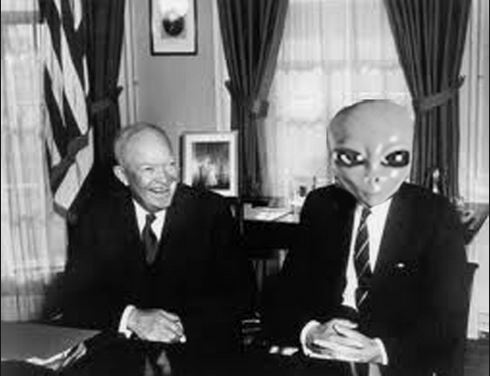 These conspiracy theories are all over the Web but archivists at the Eisenhower Library say they have found no proof of the meeting. This according to a February 18, 2004 article by the Washington Post.

When asked about a 1954 meeting between Ike and a grey extraterrestrial, Eisenhower Library archivist Jim Leyerzapf, told the Washington Post, "There's nothing in the archives that indicates that."

Another archivist at the Eisenhower Library, Herb Pankratz, specializes in the history of the former president's transportation. Since UFOs are a mode of transporation the Library decided to let Pankratz deal with flying saucer/alien stories.  The Post reported, "The library fielded dozens of questions about the alleged Ike-ET meeting in the late '80s and early '90s, when several UFO books advanced the theory."  Pankratz told the Post, "It's interesting how these stories have changed." Pankratz continued, "Initially, the accounts claimed the President made a secret trip to Edwards Air Force Base to view the remains of aliens who had crashed at Roswell, N.M., in 1947. Later stories then claimed he had actually visited with live aliens."

The iRumorMill.com crew is looking into this conspiracy theory and will be updating this page when more information develops.