Viral reports of an FBI raid for evidence at the Philadelphia campaign office of Hillary Clinton. 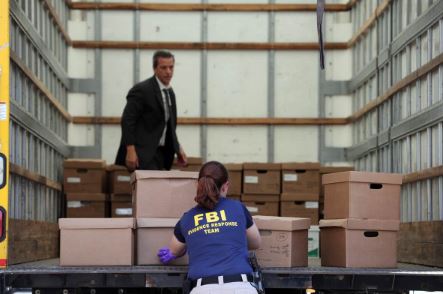 The raid was real but the target may have been Union boss John J. Dougherty of the Local 98 of the International Brotherhood of Electrical Workers in the same building where the Clinton Campaign office is located.

Dougherty had been under investigation over "allegations of the union putting pressure on contractors to use union workers." This according to an Aug 7, 2016 article by NBC10 News in Philadelphia. NBC reported, "The apparent state investigation is separate from a federal probe made public Friday after FBI agents carried out a coordinated raid operation at nine locations across Philadelphia and South Jersey."

Allegations of a Clinton raid were harvested by local talk show host Hal Turner. According to an Aug. 8, 2016 article by the Hal Turner Radio Show, "Almost a dozen FBI agents raided the Hillary Clinton Campaign Offices inside the union hall of the International Brotherhood of Electrical Workers (IBEW) in Philadelphia Sunday." Search warrants at various locations in the Philadelphia area were executed by the FBI, "but no one would say what the Search Warrant sought."  The evidence seizure took place on Sunday Aug. 7 around 3 p.m.

The Hal Turner Radio Show reported, "Authorities also searched the City Hall and district offices of Councilman Bobby Henon, the City Council's majority leader. He holds an untitled position with Local 98 of the International Brotherhood of Electrical Workers in which he reports directly to Union boss (and Pennsylvania Supreme Court Justice) John J. Dougherty, and has lose political ties with Hillary Clinton."

The Turner article said, close to a hundred boxes containing paperwork were removed by agents, along with a laptop computer and several computer hard drives which were seen being loaded into a rented Penske truck.

The iRumorMill is currently looking into this and will post findings on this page as they develop.