General Pershing and the Pig Blood

An account of how General John J. "Blackjack" Pershing dealt with terrorism in the Philippines.  The year was 1911 and a group of captured Moro warriors were lined up before his firing squad. The prisoners were all shown the mass grave that awaited them, a pit  filled with the remains of dead pigs.  The prisoners also witnessed the bullets that were to be used to take their lives being dipped in pig blood, entrails and fat.  The last man to be executed was spared and released to take back the the story. After that, all acts of terror in that area ceased. 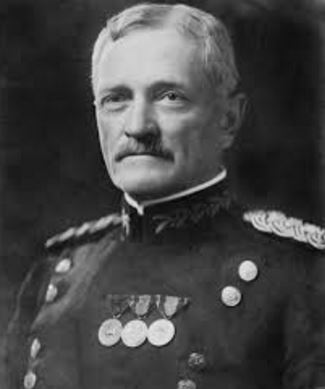 This is an old urban legend that surfaced and went viral on the Web after the 911 bombing at the World Trade Center in New York. Nobody has yet to prove that the incident took place.

There are various versions of the story, mostly having to do with the number of men captured, which ranged from a dozen to 50. Some of the details in the story varied as well, in terms of the mass grave and what material was exposed to the bullets.

Pork is not considered to be halal to Muslims but there is nothing in their religious doctrines that dictates that being buried in pork remains or being exposed to pork blood will damn a follower of Islam for eternity.

General Pershing did serve in Philippines. The Moros usually fought to the death and were rarely captured. His description of the Moros was found in a biography by Frank Vandiver:
There was never a moment during this investment of Bud Dajo when the Moros, including women, on top of the mountain, would not have fought to the death had they been given the opportunity. They had gone there to make a last stand on this, their sacred mountain, and they were determined to die fighting . . . It was only by the greatest effort that their solid determination to fight it out could be broken. The fact is that they were completely surprised at the prompt and decisive action of the troops in cutting off supplies and preventing escape, and they were chagrined and disappointed in that they were not encouraged to die the death of Mohammedan fanatics. -Vandiver, Frank E., Black Jack: The Life and Times of John J. Pershing, Texas A&M University Press, 1977, pp. 464-594