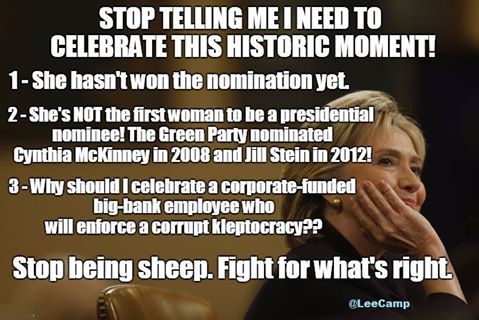 Cynthia McKinney was the first woman nominated by the Green Party along with her running mate, Rosa Clemente. This according to a July 21, 2008 article by Democracy Now.  The article said, "Former Democratic Congresswoman Cynthia McKinney, who was the first African American woman elected to Congress in Georgia, won the Green Party’s nomination last Monday." Clemente was a "longtime community organizer, journalist and former director of the Hip Hop Caucus." 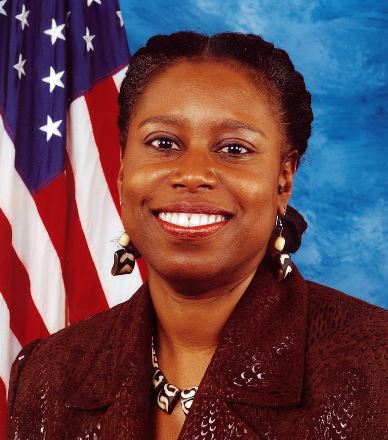 Democracy Now reported, "McKinney is among the most outspoken critics of the Bush administration, and one of her last measures as a Democratic Congress member was to introduce a bill calling for the impeachment of President Bush and Vice President Dick Cheney." After six terms in Congress, McKinney exited the Democratic Party saying, "the Democrats had become 'no different than their Republican counterparts.'" 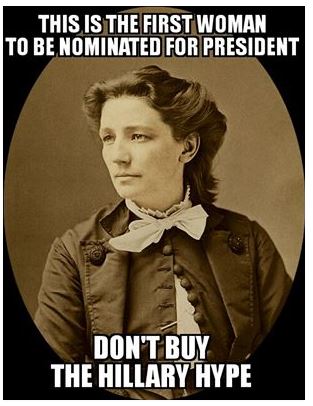 In 1872 Victoria Woodhull was technically the first female nominee for President in 1872, but no votes for her were recorded or tallied, and she was several months shy of 35 at the time of her campaign and thus technically ineligible to hold office.  According to an April 2015 article by Politico, "Woodhull ran under the banner of the Equal Rights Party—formerly the People’s Party—which supported equal rights for women and women’s suffrage." She was nominated on May 1872 in New York City and her running mate was "Frederick Douglass, former escaped slave-turned-abolitionist writer and speaker." The Oval Office battle was not going to be easy as incumbent Republican Ulysses S. Grant and Democrat Horace Greeley hats were also in the ring.

Politico reported, "On Election Day, November 5, 1872, Victoria Woodhull couldn’t even vote for herself." She ran for office "50 years before the ratification of the 19th Amendment in 1920," which gave women the right to vote.

There was also a technicality as to her eligibly to run for office. Woodhull had not yet reached the age limit set down in the U.S. Constitution. She was about 2 years short of her 36th birthday.