The iRumor Mill- Because you can't believe everything you read on the Internet!

Viral emails about Jeri Wright, the daughter of Jeremiah Wright, who was the pastor of President Obama. The emails allege that she was convicted of fraud in 2014, had ties to the President and that the story was buried by the "liberal elite media."

It is true that Jeri Wright was convicted of fraud, according to a March 7, 2014 article by the Chicago Tribune.

The article said, Wright "was convicted by a federal jury Friday of laundering thousands of dollars from a $1.25 million state grant for a Chicago-based job-training program."

Barack Obama attended Trinity United Church of Christ in Chicago where Wright's father, Jeremiah, was pastor. The Obamas were married at that church. The iRumorMill.com has no doubt that Jeri Wright may have socialized with the Obamas but we have found no evidence that they had any business or political dealings. While Barack Obama was running for the Oval Office in 2008, critics accused Obama of getting his spiritual advice from a radical Rev. Wright, who once said, "God damn America" and blamed the U.S. for the September 11, 2001 attack by radical Muslim terrorists. The Presidential candidate quickly distanced himself from Rev. Wright.

It is not true that the story of Wright's conviction was buried by the left wing of the media. The story was reported by NBC, ABC, and Huffington Post. 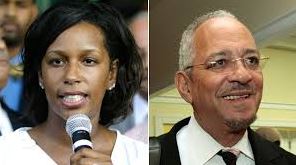