Kenya Border Sign that said, "Welcome to Kenya, the Birthplace of Barack Obama"

Photograph of a sign allegedly taken in Kenya that says Barack Obama was born there.

This photograph was believed to be a digital manipulation until a member of the iRumorMill.com crew talked to someone whom he had known for 20 years and claimed to have seen it with his own eyes while he was on a mission trip to Kenya.

What made us believe that the sign may may have been a digital manipulation is, according to the CIA Factbook on Kenya, the national languages are English and Kiswahili, a dialect of Swahili.  It would make no sense for Arabic letters to appear on such a sign at a border crossing.

The CIA factbook said that Kenya is primarily a Christian nation with 47.4% Protestants,  23.3% Catholics and 11.8 other branches of Christianity.  The country consists of 11.1% people who practice the Muslim faith.

One fact about the sign that we can say is real is that Kenya is the birthplace of Barack Obama. Barack Hussein Obama I, the father of the 44th President of the United States was born in Kenya on June 18, 1936. 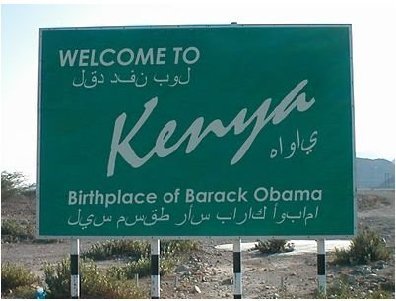