Viral email that alleges the reason Democrats did not support the Keystone XL Pipeline is because it would hurt the income of Warren Buffett, a financial supporter of President Obama.

Allegations that the Democrats did not support the bill because its passage could financially harm Warren Buffet are false.

Although Buffett has been on record as a supporter of President Obama, he actually thought the pipeline was a good idea, according to a March 3, 2014 article by Forbes.

The article also said he stood to benefit either way because rail would still be needed to transport the raw materials needed to build the project.

Senator Barbara Boxer (D-CA) was the leading opponent of the bill because of reports on how it could effect on the the environment.

On September 12, 2013, Boxer addressed her fellow senators and said that the pipeline project "would ship one of the dirtiest fuels on the planet through America's heartland and through critical water supplies."

Boxer added, "It would increase carbon emissions and the oil would be exported to other countries."

On November 18, 2014 Boxer said "XL" in the Key Stone XL Pipeline project stood for "extra lethal." Saying that lawmakers should concentrate on clean energy solutions instead of the Keystone Pipeline, which would only create 50 permanent jobs.

Boxer raised her concerns by stating, "tar sands oil contains levels of toxic pollutants and metals that are much higher than conventional crude oil."

Senator Chris Coons of Delaware also voted against the bill out of concern for the environment, according to a statement found on his blog:

Senator Coons is fighting to protect our environment and preserve our natural resources for future generations. He knows that many Delawareans have strong feelings about the proposed Keystone XL pipeline, and believes it is extremely important that this project go through the full and thorough established review process, which the Administration is currently undertaking. The President has final authority to approve or deny the Keystone XL pipeline. Senator Coons voted for an amendment to the budget that takes into account the existing process, and the reality that if the Administration approves this project it will have a budgetary impact. The amendment passed 62-37.

According to a August 26, 2011 article by Dow Jones Newswires, the State Department released the findings of the environmental impact report on the Keystone Pipeline project.

The report said, "would pose "no significant impacts" to most resources along its proposed corridor if the company follows through on environmental protection measures."

BMO Capital Markets analyst Carl Kirst told Dow Jones, that the conclusions of the environmental impact study were exactly what his group was expecting. Kirst added, "We've always had a high conviction that this project would be green-lighted.

If the State Department now has what it sees as a supportive environmental statement, I don't see how they can turn down this project."

Listening to Boxer's argument, it appears that it wasn't really the pipeline construction that was she an issue with, but the tar sands oil that going to be transported within the pipe, and how it was to be refined. 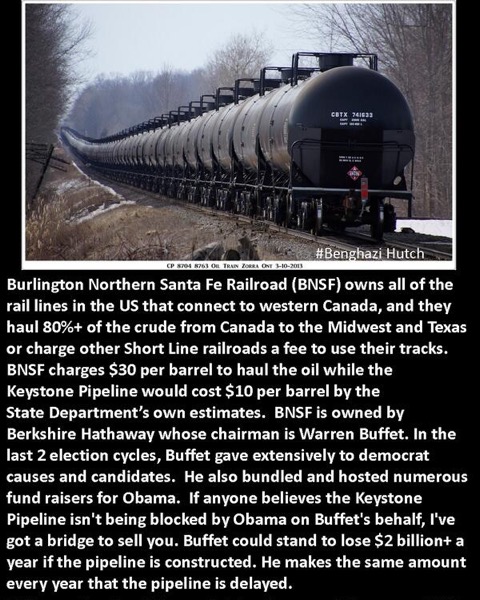