Reports that a Muslim prayer service took place at the National Cathedral in Washington D.C.  Further reports say an angry protester interrupted the event, declared the deity of Jesus and that the cathedral was built to worship Him.

According to a November 14, 2014 article by the Washington Time, there was a Muslim prayer service at the Washington National Cathedral for the first time in it century-old history.

The article said, "The beginning of the prayer service was interrupted by an unanamed female protestor shouting about “Christian principles.”

The woman stood up and pointed to a cross inside the hall and told the audience, "Jesus Christ died on that cross over there. He is the reason why we are to worship only him. Jesus Christ is our LORD and Savior."  At that point, she was quickly escorted out of the cathedral by security as she continued talking.

People around the country are asking if the U.S. Government has gone too far pushing God and the Ten Commandments out of the schools and public places while at the same time they seem to be giving favor to Islam.

In our investigation the iRumorMill.com crew learned that the unidentified woman was Christine Weick and we interviewed her for our audio blog.

White told the iRumorMill.com crew that she was not harmed by security and when she was escorted out of the Cathedral by police, she expected to be arrested and charged. When she held her hands out to be cuffed a police officer took her hand and gently walked her off the cathedral  grounds and let her go on her way.

This was not the first time that her protests made the TV News airwaves. White told us that she was speaking out against same-sex marriages at a courthouse in Michigan. Many called her a hater but White calls herself a "Stander for God" who wants to share His love to the world around her. 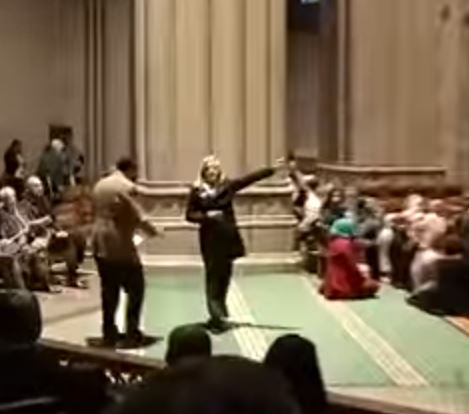