Reports of violence erupting from Anti-Trump protesters at the Pacific Amphitheatre in Costa Mesa, California. There were also reports of protesters in Orange County shot pepper spray at Trump supporters and their children. 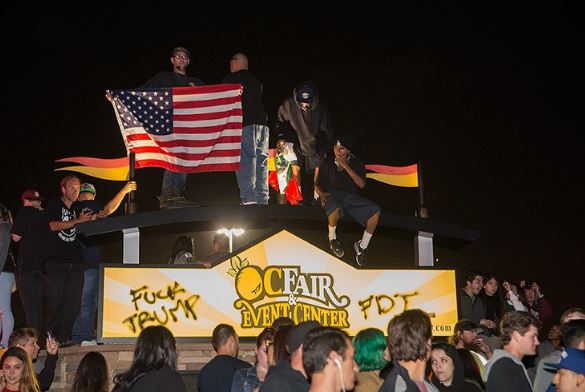 The incident was real.

As 8000 Donald Trump Supporters attended a rally at the Orange County Fairgrounds on the evening of April 28, a mob of Anti-Trump protesters grew larger outside the Pacific Amphitheatre. The Orange County Register reported "Demonstrators jumped on a Costa Mesa police car, breaking out the windows and attempting to turn it over, as tensions escalated after a Donald Trump rally on Thursday night."

The Trump supporters began showing up around 4:30 in the afternoon and so did protesters. The Register said, "Earlier, authorities said the crowd was declared an 'unlawful assembly' and ordered people to disperse." Law enforcement began "pushing the crowd east on Fair Drive toward the 55 freeway."

Various news sources said 200 law enforcement officers were called in from the surrounding communities to help keep peace on the streets. Five Orange County Sheriff helicopters were spotted over the incident. 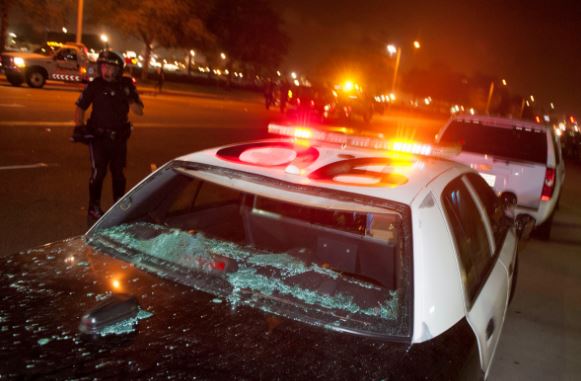 For the most part, reports of clashes were mostly an exchange of words and obscenities.  Later in the evening is when violence erupted. Crowds refused to disperse, which resulted in a stop of traffic flow in the area. There were some reports by various news sources of Trump supporters getting pepper sprayed by protesters at Orange County Trump rallies.  One protester climbed a street signal pole and scribbled "F*** Trump" on the top of the signal. One police squad car ended up with smashed windows after protesters tried to push it over.

The Register reported, "Orange County Sheriff’s deputies were threatening to arrest hundreds of people who filled an intersection chanting, 'Whose streets? Our streets!' as a large crowd poured out of the Pacific Amphitheatre.

The were about 20 arrests made that night and the "crowd eventually dispersed by 11 p.m."