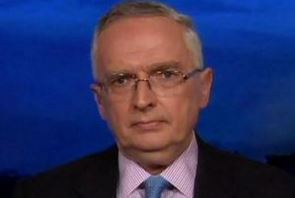 Former U.S. Army Lt. Col. Ralph Peters appeared on the Fox Business Channel with Stewart Varney, who asked about his reaction to the president’s national address in the aftermath of the Dec. 2 terrorist incident in San Bernardino, Ca. The retired military man did not hold anything back.

In his response to the President's address Peters said that we are not giving into fear, as Obama suggested, but are angry and "pissed off." Peters also said that people want him to do something and suggest that the President was afraid and was a "total pussy."

Varney warned Peters, “I can tell you are super angry, and I asked you what your reaction was, but you can’t use language like that on the program.”

Later in the interview Peters continued to use strong language, which was bleeped out by the network.

According to a Dec. 7, 2015 article by The Gawker,  Peters did apologize for his words but was suspended for two weeks by the Fox News Network.

The iRumormill.com crew found video, which contains the strong language and may be considered offensive, on YouTube: