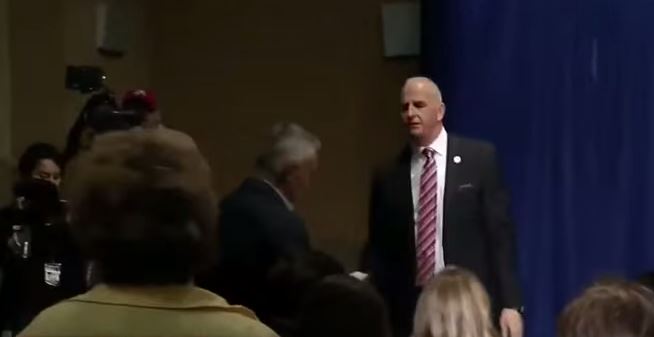 Jorge Ramos was escorted out of a Trump news conference after he "stood up and began to ask Trump about his immigration proposal, which includes ending automatic citizenship for infants born in the United States to parents in the country illegally." This according to an August 8, 2015 article by Fox News. The incident was also covered by other news agencies.

Fox News video attached to the story showed Trump trying to field questions from another reporter when Ramos jumped up and began shooting questions to the GOP candidate. Trump repeatedly told Ramos to "sit down" and then told him, "Go back to Univision."

After a short time Ramos was permitted back into the room and was allowed to question Trump about his proposed immigration policy.

Ramos, whose daughter is employed by the Hillary Clinton 2016 Campaign, questioned Trump's proposal to end birthright citizenships and build a wall between the U.S. and Mexico at the border and told him "that 40 percent of people in the country illegally enter through airports, not over the Mexican border." Trump responded, "I don't believe that. I don't believe it."

In the aftermath, Ramos was invited by Fox News to discuss his side of the incident and appeared on the Megyn Kelly program. He told Kelly, Trump's "words are dangerous, and his ideas are extreme when it comes to immigration and when it comes to freedom of the press."  Twice in his interview, Ramos compared Trump's actions to that of a dictator.

Other Fox News contributors viewed the actions of Ramos to be totally inappropriate. Mark Levine appeared on Hannity where he called Ramos a bully. Levine went on about Ramos and said he was a "fanatic, he's obnoxious, he's a pretend journalist."  Levine added, "He's running around today saying that he's defending the 1st Amendment. Really? Since when are hecklers defending the 1st Amendment?"

CNN had a headline the following day that said it was Trump who should have been ejected.

MSNBC's Chris Hayes commented about the incident that Ramos was "symbolically deported" from the room. Video was found on the Media Matters website.