Reports have gone viral that officials from the state of Oklahoma ordered the removal of a monument of the Ten Commandments from the capital grounds after a court ruling. 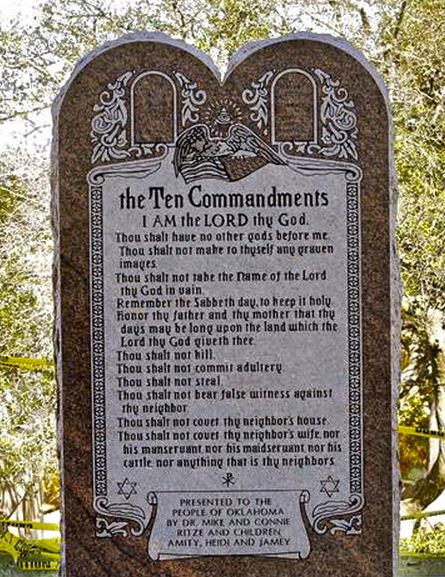 It appears that the Ten Commandments are not OK in OK.

According to an October 6, 2015 article by Fox News the monument of the Ten Commandments was removed quietly and under the cover the darkness of night to avoid protesters. The article said, "Workers began removing a Ten Commandments monument from the grounds of the Oklahoma Capitol late Monday in accordance with a court order."

Fox reported that the monument was 6-foot high and there are plans to move it just "outside the Oklahoma Council of Public Affairs, a conservative think tank."

The article said, the state hired a contractor hired to remove the monument and shortly after 10:30 p.m. local time, the work began.

Last June the Oklahoma Supreme Court's decided that the monument "violates a state constitutional prohibition on the use of public property to support 'any sect, church, denomination or system of religion.'"