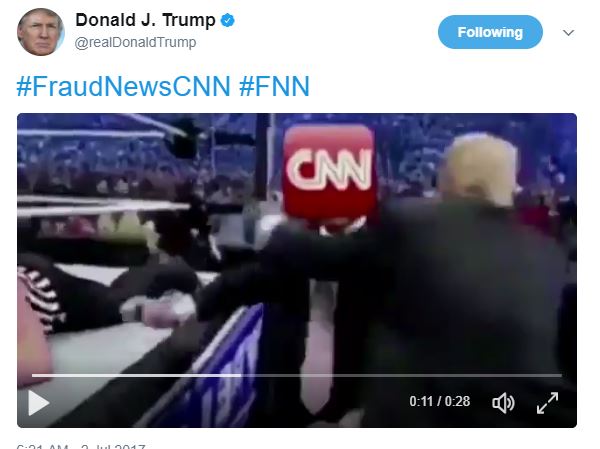 On July 2, 2017, President Trump posted a video on Twitter that was recorded in 2007 of a staged brawl with WWE head Vince McMahon. This according to a July 3, 2017 article by Fox News.

The reaction of the Liberal Media went viral following the tweet. Brian Stelter, a media critic with CNN, alleged "the tweet was so offensive it should lead to the president being removed from Twitter." This according to the Fox News report that attached to the article. Fox commentator, Tucker Carlson, pointed out that it was strange for a member of the media to call for such a censorship.

In a related Fox Report, Rep. Scott Taylor (R-VA) appeared on CNN's "New Day," with host Alisyn Camerota when asked "about the president's Twitter habits," he replied that CNN was "getting played" by Trump. Since early on in the election campaign Donald Trump has been trolling the liberal media.

Critics of the liberal main stream media compared their reaction to the tweet to their hailing reaction of the Kathy Griffin photo of her holding the decapitated head of Donald Trump.