Trump protesters claim that the GOP candidate is a racist because he said illegal aliens were rapists and drug smugglers. 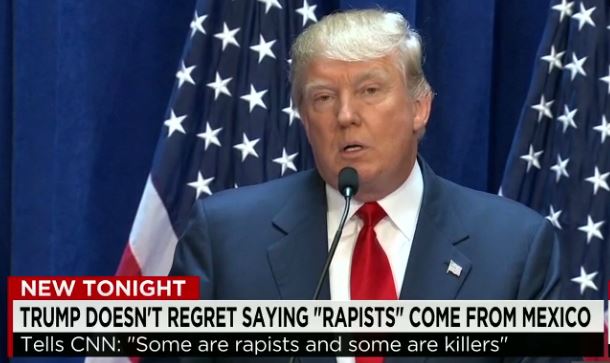 This does not validate Donald Trump as a racist because he was stating true facts. The GOP candidate does have a tendency of sayings things that may be misinterpreted by critics of his campaign, but the crew at the iRumorMill.com doubt Trump is a racist.

During debates and at rallies, the GOP favorite said many of the illegals coming into the U.S. from Mexico were rapists. This is true according to a Sep. 22, 2014 article by the Huffington Post, which said, "80% Of Central American Women, Girls Are Raped Crossing Into The U.S."

Many Trump critics claim that he is a racists but fail to point out exactly one example. What is surprising is that Trump was quoting facts reported by a leading liberal news source, the Huffington Post.


The article said, "80 percent of women and girls crossing into the U.S. by way of Mexico are raped during their journey." Citing reports by Amnesty International, Huffington said this was an increase "from a previous estimate of 60 percent."

The facts that illegals coming into the U.S. smuggling drugs are part of the agreement to be snuck across the borders are real. They come by land and sea. Tunnels under the border are often reported by Southern California news media. The U.S. Border Patrol and U.S. Coast Guard are often intercepting "Panga" boats loaded with illegal aliens and drugs.

The boats begin their journey in fishing communities just South of the U.S. Mexican border. According to a Aug. 26, 2010 article by NBC News, "Jose Eduardo Montero, public safety chief of Playas de Rosarito, is concerned for the safety of his community. "The place is invaded by criminals, drug traffickers, undocumented immigrants, drug dealers," Montero told NBC. He added, "It's all mixed in with the fishing business."

Video of Panga boat incidents were found posted on YouTube by the U.S. Coast Guard:

The iRumorMill.com crew also found this video posted by the Associated Press:

US Immigrations and Customs Enforcement statistics


According to statistics posted on the Immigrations and Customs Enforcement (ICE) website, of the illegal immigrants apprehended by officials after 2010, the majority were convicted of crimes.