TMZ's reports and photos of Donald Trump Jr.'s big game hunt in Africa. One shows the son of the Presidential candidate holding a dead elephant's tail in one hand and a knife in another. 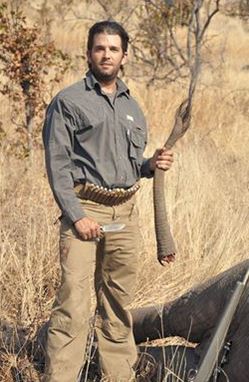 Donald Trump Jr. and his brother, Eric, did go to Zimbabwe on a hunting trip but the reports by TMZ were more judgmental and lacked journalistic research, according an April 9, 2012 article by Forbes.

The sons of real estate mogul Donald Trump did travel in 2011 to Zimbabwe where they hunted elephant, leopard, crocodile, kudu, and waterbuck. Several photos were taken, which Forbes reported TMZ ran them "with a quote calling the Trump boys 'pitiful bloodthirsty morons.'”

Forbes reported that "TMZ also quoted Jack Carone, from the animal-rights group In Defense of Animals, saying, 'Privilege has clearly not bought them the sensitivity or wisdom to view the world as anything but their personal playground, including the imagined entitlement to end the lives of sensitive and social animals for mere amusement.'”

This raised they eyebrows at Forbes "because Donald Trump Jr. has never played the part of the spoiled playboy." Forbes looked into the young Trump and found him to be "a hardworking family man," who earned his bachelor’s degree in Finance and Real Estate at the University of Pennsylvania. Donald Jr. is also "an ambassador for Operation Smile, a children’s medical charity that provides cleft-lip and palate repair surgeries to poor children worldwide."

As for the hunting trip, Forbes said TMZ was quick to judge and cast contempt prior to investigation.

Forbes investigated hunting in Zimbabwe as well as talked to Donald Jr. who told them "that Africans traditionally cut off the tail and make bracelets from the tail hair."  This is done as a "sign of respect for the fallen animal. Zimbabwe allows the hunting of elephants because they "are over-populated in the area," which helps to prevent the enormous beasts from "further destroying their habitat." The article said, "when elephants overpopulate they literally rip down the forest" and that "the result of an overpopulated elephant herd is death by starvation and disease." The Zimbabwe Parks and Wildlife Management Authority regulates hunting "to benefit all species and the ecosystem."