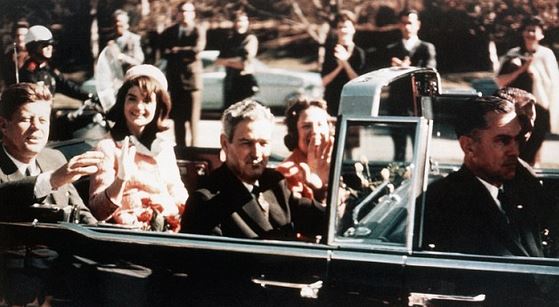 On November 22, 1963 President John F. Kennedy was riding in an open-topped Lincoln limousine though Dealey Plaza in Dallas, Texas when he was struck and killed by two bullets. One bullet stuck his head and the other bullet hit him in the neck. A former U.S. Marine and one time Soviet defector, Lee Harvey Oswald was charged the assignation of the Kennedy. Prior to the charge, Oswald was in custody for the murder of police officer J. D. Tippit, who was shot on a Dallas street less than an hour after the shooting in Dealy Plaza.

In 1964, it was determined that Oswald had acted alone by a presidential commission headed by Chief Justice Earl Warren.

In the decades to follow that conclusion has not been wholeheartedly agreed on by the American public.

According to a Time Magazine report, ABC conducted a poll in 2003, which concluded that “that 70% of Americans believe Kennedy's death was the result of a broader plot.“ Many believed that the trajectory of the bullets, did not match with Oswald's position, high above the plaza, on the 6 floor of the Texas School Book Depository. Many believe there was a second gunman involved in the shooting and speculated that he may have been on the Dealy Plaza grassy knoll of Dealey Plaza.

Others believe there there is a much bigger picture to this and that Kennedy may have been killed by CIA agents as a payback over the Bay of Pigs incident in Cuba. Others believe the CIA got orders to terminate the President from Vice President Lyndon Johnson. Another possibility, some believe, was that KGB operatives were involved in the assignation. The president's brother, Attorney General Robert Kennedy, had begun prosecuting mobsters for organized crime and some believe this was a hit by gangsters.

This incident, although officially closed by the U.S. Government remains a mystery in the hearts and minds of many who lived during the Camelot days and are still alive to talk about it. The ABC poll concluded that only 32% believe that Oswald was the lone gunman in the killing of an American President.