Video found on YouTube shows what appears to be the driver of President Kennedy's limo as the trigger man. As the limo is moving, all eyes are on President Kennedy. The description says, "At exactly 0.3 seconds freeze frame: you clearly see a whitish glowing reflection on the top back of the drivers head, as well as his for arm and the hand gun that he shoots JKF with..the driver is a top secret, highly trained hit man & executor who knew how to wield a handgun, along with a few other perpetrates they had flown in from France.. the shot from the gun didn't even make the driver swerve an inch, although you clearly see that the power of the gun shot did allow the driver to swing his body back around much quicker, for many, no amount of evidence can make someone see what they cannot accept- you can clearly see the drivers head spin around as he lifts the gun over his left shoulder ,points the gun at JFK & blows his head open -I know the man in the back seat was involved as well ,because he kept the prez and the first lady preoccupied in conversation so that their attention was not focused up front on the driver-at this point you know the man in the passengers seat up front was also in on it -This is shocking, but blatantly obvious ! I can clearly see the driver shot JFK. I found this to be incredible evidence."

We determined this conspiracy theory to be false upon inspection of the video. What appears to be a gun is the sun's reflection off the top of the head of the passenger in the front seat of the limo. The driver also maintained both hands on the steering wheel at the time of the shooting.

Logically, a killer would want to give himself a much better exit strategy rather than driving away from the scene of the crime with a police escort and Secret Service detail. Below is a close look at a frame from the video. Notice the glare on the top of the right front passenger. 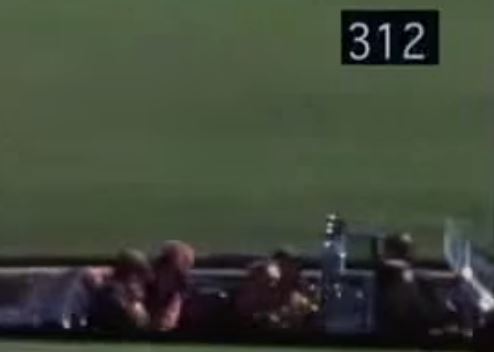 More conspiracy theories on the assassination of John F. Kennedy