U.S. History may not be President Obama's Forté 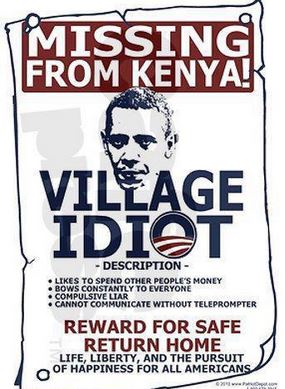 When President Obama defended his decision to swap 5 terrorists for the release of Army Sgt. Bowe Bergdahl, he said that George Washington, Abraham Lincoln and Franklin Delano Roosevelt also took every possible step to bring home American military POWS at the end of a war.  Critics of the President alleged that he knew nothing about American history.

Washington was elected president in 1789, six years after the Treaty of Paris was signed, ending the Revolutionary War.

Lincoln died on April 15, 1865 and the Confederate forces surrendered one month later. There were no prisoner exchanges, all Rebel and Union soldiers were simply freed and went home.

Franklin Roosevelt also died before the end of WWII.  Harry S. Truman was in office at the end of the Second World War.

Critics alleged those three presidents could not have negotiated any prisoner of war exchanges and somewhere in Kenya a village is missing an idiot.

According to a June 3, 2014 article by the Washington Times, President Obama did compare himself to Washington, Lincoln and Roosevelt in making a prisoner exchange for Sgt. Bowe Bergdahl.

The iRumorMill.com crew took a look at the Revolutionary War, Civil War and WWII time lines, which validated the historical facts brought up by critics.

Abraham Lincoln was shot by John Wilkes Booth about one month before the Civil War officially ended.

President Harry Truman ordered the dropping of the atomic bombs on Hiroshima and Nagasaki in August 1945. FDR died on April 12, 1945.