Members of U.S. Government and press are incorrectly calling the AR-15 rifle an "assault weapon."

The AR-15 is not an assault weapon according to many firearms experts, instructors and enthusiasts.

AR actually stands for "ArmaLite rifle", the company that developed the weapon back in the 1950s.

AR does not mean "assault rifle." This rifle is considered a “Modern Sporting Rifles” (MSR), and although this style resembles the typical assault rifles used by the military, there are major differences. This according to an article posted on the website of  Gun Owners' Action League.

Assault rifles can fire multiple rounds (bullets) with the single pull of a trigger.

The MSR is not equipped to perform that function, nor is it legal to adapt it to do so. There are myths that some MSR can be modified but the general consensus from experts is that the parts to do so do not exist for this

Assault rifles are issued to military members and sale to to the public is illegal.

The MSR is available to the public and there are federal, state and local regulations which regulate their sale.

This meme was found on social media shortly after the terrorist attack in Orlando. 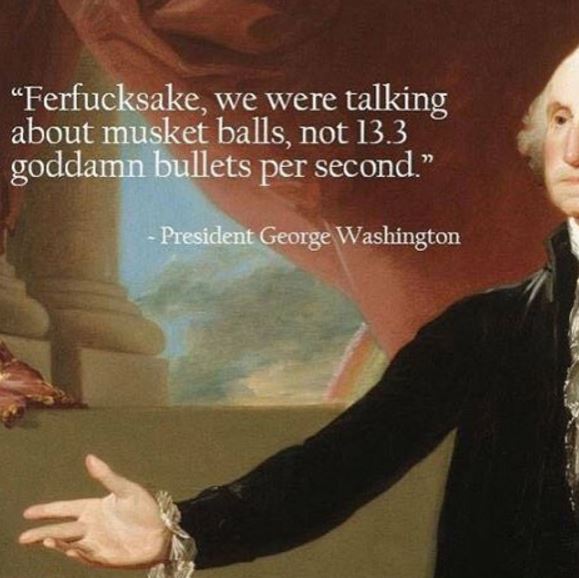 Obviously, George Washington never said this but look at the message. There are no rifles available to the public that can fire 13.3 rounds per second. The misinformation is overwhelming by those who are passionate to ban the AR-15.

Many advocates for Second Amendment rights allege that in order to promote an agenda to ban fire arms in the country, elected members of government and the media have misclassified the AR-15 as an assault weapon.

After the June terrorist attack on a gay night club Orlando, Alan Grayson (D-FL) told reporters that the AR-15 can fire 700 rounds per minute. It is petty obvious that Grayson doesn't know the difference between a military issue M-16A1 automatic, capable of firing off 650 - 750 rounds per minute, M-16A2 capable of shooting 700 - 950 rounds per minute, or an AR-15 semi-automatic, which is available to the public. Also, such machine guns are not fired off for a minute at a time. Machine guns are fired off in short bursts in order to prevent a melt down of the weapon.

Although looks may be deceiving, the AR-15 is not a machine gun that can shoot 700 rounds a second.

The Gun Owners' Action League said, "MSR style rifles look like military rifles, such as the M-16 and AK-47 but function like any other semi-automatic civilian sporting firearms, firing only one round with each pull of the trigger."

The weapon used by the Orlando shooter was a Sig Sauer MCX (shown above), which is a MSR AR style rifle with a magazine capacity of 30 rounds. Although some MRS weapons may work with high capacity magazines there are federal, state and local laws limiting the size of the magazine available to the public.

For example, the website of the California Attorney General said:

Generally, it is illegal to buy, manufacture, import, keep for sale, expose for sale, give or lend any large-capacity magazine (able to accept more than 10 rounds) in California. However, continued possession of large-capacity magazines that you owned in California prior to January 1, 2000, is legal provided you are not otherwise prohibited. A person prohibited from possessing firearms is also prohibited from owning or possessing any magazines or ammunition.

Bottom line, it is the responsibility of gun owners to know federal, state and local laws concerning their weapons.

The iRumorMill.com crew found this video on YouTube, which instructs on the differences between MSR rifles and Assault rifles.


The video below shows how an M-15 (assault rifle) differs from the operation of an AR-15(MSR):