As he was giving some final comments on the terrorist activities of Antifa, former Speaker of the House Newt Gingrich drove a point home alleging that the problem stems from elected officials put in office by the donations made by  George Soros. An awkward moment followed when the speaker was told by a member of the panel not to bring Soros into the topic. Viewers are speculating what hold Soros has over Fox News Network. 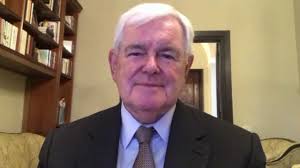 Former Speaker Newt Gingrich was a guest on the Fox News program "Outnumbered," and at the end of the segment did make some serious allegations connecting the release and lack of prosecution of Antifa anarchists to George Soros. Gingrich said the problem with all the cities where riots took place are the "left wing, anti-police, pro-criminal district attorneys who refuse to keep people locked up." Twice in these comments the former House Speaker alleged that they were put in office with the financial contributions of George Soros. Gingrich was told by Serve America PAC Exec Director, Marie Harf, that he should not bring Soros into the conversation.

The program's host, Harris Faulkner, remained quiet during the exchange between Gingrich and Harf, After an awkward pause Falkner "moved on" and left the topic. It appears she was being cued by producers through an ear piece.

Video was found on the Internet:


The following day, Outnumbered host, Harris Faulkner, aired an apology to Speaker Gingrich, saying that it is not the policy at Fox News to censor guests.

"More local attorneys have won elections this cycle with the help of money tied to megadonor George Soros, raising additional questions about the the billionaire's apparently ongoing campaign to influence local law enforcement."  This according to a November 11, 2020 article by Fox News, which said, Soros "donated at least $1.5 million to the California Justice and Safety PAC, which backed Democrat George Gascón of Los Angeles. Shalena Cook Jones, the Democratic district attorney-elect for Chatham County in Georgia, also won her race after receiving at least $80,000 in advertising support from that same PAC."

Fox cited the The Washington Post, who "reported that the Justice and Public Safety PAC had fed progressive challengers nearly $1 million in Arlington and Fairfax Counties' Democratic primaries for prosecutor." The article said a GOP district attorney candidate in Henry County, Georgia had to drop out of the race "after Soros Fund Management backed his opponent."

Trump supporters are speculating that this is all part of an elaborate conspiracy theory known as Hammer and Scorecard to win the election for Joe Biden, Hammer is the placing of left leaning District Attorneys who oversee elections for their states.

Hammer and Scorecard to Defeat Trump