A viral account by KABC 790's morning anchor, Leeann Tweeden, alleging sexual misconduct by Al Franken. Tweeden released an article on the website of KABC that said she was repeatedly kissed by Franken and while she was asleep on a C-17 during a USO show, Franken posed for a photo while groping her. 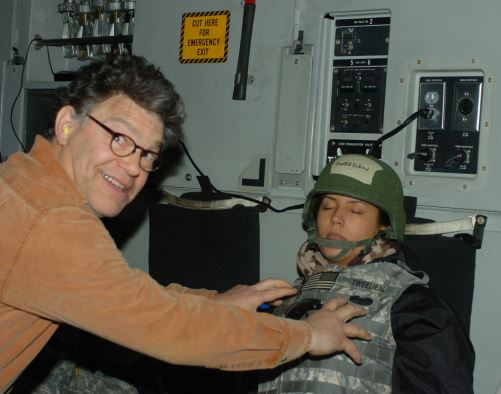 Tweeden posted her account of the incident on the website of KABC 790AM in Los Angeles. Tweeden said the USO troop boarded a C-17 in Afghanistan and she immediately fell asleep. Sometime later the photo was taken, which she received in a CD-Rom after the trip.

In preparation for the show Tweeden said that Fanken was putting the moves on her:

He continued to insist, and I was beginning to get uncomfortable.

He repeated that actors really need to rehearse everything and that we must practice the kiss. I said ‘OK’ so he would stop badgering me. We did the line leading up to the kiss and then he came at me, put his hand on the back of my head, mashed his lips against mine and aggressively stuck his tongue in my mouth.

I immediately pushed him away with both of my hands against his chest and told him if he ever did that to me again I wouldn’t be so nice about it the next time.

Tweeden wrote that she felt "disgusted and violated," but did not report the incident because she didn't want to "cause trouble." Tweeden wrote," We were in the middle of a war zone, it was the first show of our Holiday tour, I was a professional, and I could take care of myself. I told a few of the others on the tour what Franken had done and they knew how I felt about it."

In response to the allegations, Franken issued an apology after seeing the photo, "I don't know what was in my head when I took that picture, and it doesn't matter. There's no excuse. I look at it now and I feel disgusted with myself. It isn't funny." This according to a November 16, 2017 article by Politico.

On Dec. 7, 2017, after additional accusations against the Senator, Franken announced that he would resign from the U.S. Senate. Franken said, "Serving in the United States Senate has been a great honor of my life. I know in my heart that nothing I have done as a Senator, nothing, has brought this honor on this institution and I am confident that the ethics committee would agree. "