Concerns about the health of Democratic Candidate Hillary Clinton. Are they genuine or conspiracy theories? 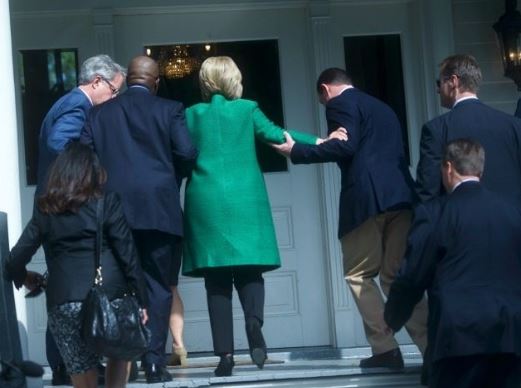 Hillary Clinton's Health has gone viral over the summer months of 2016.

Update 09/11/16 - Hillary Clinton attended a 9/11 memorial service at Ground Zero left the commemoration ceremony early after feeling overheated. Clinton went to her daughter's nearby apartment. Clinton campaign spokesman Nick Merrill said. "Secretary Clinton attended the September 11th Commemoration Ceremony for just one hour and 30 minutes this morning to pay her respects and greet some of the families of the fallen. During the ceremony, she felt overheated so departed to go to her daughter's apartment, and is feeling much better." This according to a 09/11/16 article by CNN.

"Clinton's doctor said the episode was a result of heat and dehydration -- and revealed she had been diagnosed with pneumonia two days prior." This according to a Sep. 11, 2016 article by Fox News.

Back in August, former NYC Mayor Rudy Giuliani appeared on Fox News and warned views of the health condition of Hillary Clinton. He urged people to look for videos on the Internet that support such theories.  This according to an Aug. 22, 2016 article by NBC News.

Radio Host Dr. Drew Pinsky went over Clinton's release health reports with another medical doctor on is program and said he was gravely concerned, not only about the health of the presidential candidate but of the level of treatment she was receiving.

Pinsky said Clinton was being treated for blood clots in the leg and hypothyroidism. The medications she had been prescribed were "old fashion."

Dr. Drew appeared later that day on radio station KABC and was interviewed about his concerns.

The article said, "CNN executive vice president Ken Jautz said he and Pinsky 'have mutually agreed to air the final episode of his show on September 22' but gave no specific reason for the cancellation."

There are also rumors that Wikileaks released some searches from Hillary Clinton's computer for adult diapers.  The iRumor Mill crew checked the Wikleaks site and found so findings.

The iRumorMill.com crew is looking into the health of Hillary Clinton and if we get any updates we will posted them on this page.