Viral posts on social media alleging John Coleman, founder of the Weather Channel, has publicly stood up and said that manmade global warming and climate change is a myth. 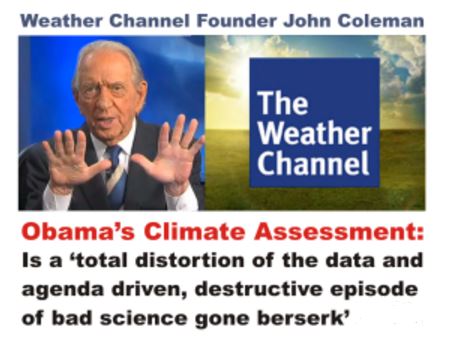 John Coleman stance against climate change is real. He sent an open letter to the Hammer Museum at UCLA urging them to  to provide balance in its presentation “Tackling Climate Change Nationally and Globally”

Coleman founded the Weather Channel in 1981 and in 1983 was awarded Broadcast Meteorologist of the Year by the  American Meteorological Society.

In October 2014 Coleman appeared on the Fox News Network and was interviewed by Megyn Kelly.

Weather Channel CEO David Kenny about Coleman said: "We're grateful that he got us started 32 years ago. But he hasn't been with us in 31 years. So he's not really speaking for The Weather Channel in any way today."

Supporters of Climate Change question Coleman's credentials. Although he has been an award winning weatherman for 6 decades he holds a bachelors degree in journalism from the University of Illinois. It is interesting that nobody ever has questioned the credentials of Al Gore, Leonardo DiCaprio or Bill Nye. These leading Climate Change spokespersons are a lawyer who became a Vice President, high school drop out who became an actor and a mechanical engineer who once took an astronomy class taught by Carl Sagan.

More related iRumorMill articles can be found at:

Glenn Beck’s message to Obama: ‘Screw global warming . . . it IS about Islam’

Obama to Pledge $3 Billion to U.N. in Climate Aid for Developing Countries