Sheila Jackson Lee on a Plane

On Dec. 18, 2017 United Airlines passenger Jean-Marie Simon was bumped from her first class seat leaving Houston and found out that U.S. Congresswoman Sheila Jackson Lee  (D-TX) was occupying it. In a tweeted vent Simon wrote, "Sheila Jackson Lee (D-Texas) in seat 1A the one I paid for dearly, and the one United gave to her without my consent or knowledge! Fellow congressman on same flight said she does it repeatedly." 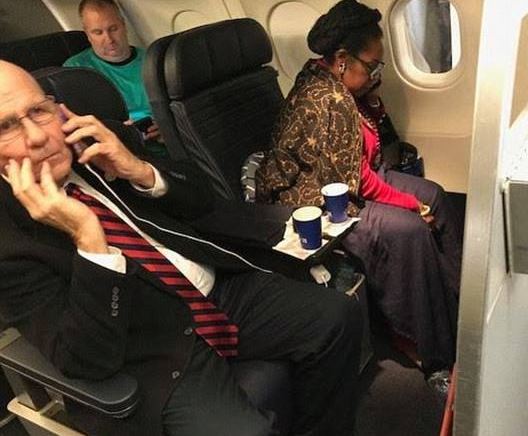 We are not disputing the incident but looking into the history of repeated incidents.

On Dec. 23, Jean-Marie Simon posted the photo above on her Twitter feed along with a comment: "Sheila Jackson Lee (D-Texas) in seat 1A the one I paid for dearly, and the one United gave to her without my consent or knowledge! Fellow congressman on same flight said she does it repeatedly."

Rep. Lee retaliated with the race card on her Facebook page:

Statement from Congresswoman Sheila Jackson Lee regarding incident on recent flight from Houston to Washington, D.C.:

“I am disappointed in having to respond to this accusation, but I believe transparency is very important. Unfortunately, it looks like Grinch is trying to steal the spirit of the holiday.

Last Monday, I arrived at the airport to catch my flight to Washington to continue my fight to get Hurricane Harvey funds back to Texas and other hard hit areas, along with funding of the Children’s Health Insurance Program and of course, trying to stop a tax bill that was going to cause millions of Americans to lose their health insurance.

I later came to understand that the individual had canceled her own flight. However I had nothing to do with that.

I noted that this individual came toward me and took a picture. I heard later that she might have said “I know who she is.” Since this was not any fault of mine, the way the individual continued to act appeared to be, upon reflection, because I was an African American woman, seemingly an easy target along with the African American flight attendant who was very, very nice. This saddens me, especially at this time of year given all of the things we have to work on to help people. But in the spirit of this season and out of the sincerity of my heart, if it is perceived that I had anything to do with this, I am kind enough to simply say sorry. I understand the airline is working to address the passenger’s concerns. I am glad of that.

But as an African American, I know there are too many examples like this all over the nation. I hope one day, we will accept our collective diversity. Happy Holidays.”

Please Help Us in Our Investigation:

The iRumorMill.com crew is looking into to allegations that Lee has a habit of bumping people from their flights.

If anyone has had a similar experience getting bumped off a flight by Lee or any elected official please contact us at staff@iRumorMill.com