Viral reports alleging U.S. citizenship was granted to more than 800 illegal immigrants by the U.S. Government by mistake. 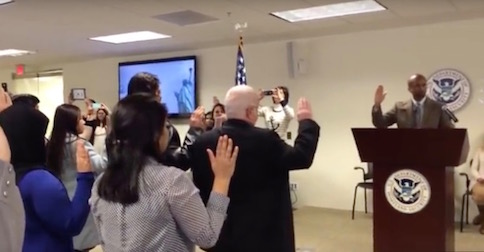 The reports are real according to several news agencies.

According to a Sept. 19, 2016 article by Fox News, the mistake was revealed by a Department of Homeland Security (DHS) internal audit. The Fox News article said, "More than 800 illegal immigrants from countries of concern who were set for deportation were mistakenly granted U.S. citizenship because the Department of Homeland Security didn’t have their fingerprints on file."

"They should have been deported, but hundreds of illegal immigrants from dangerous countries were instead granted citizenship by Homeland Security because officials never checked their fingerprints to find out their real identities, the department’s inspector general said in a staggering report Monday." This according to a Sept. 19, 2016 Washington Times article.

Video of a discussion with former U.S. Ambassador John Bolton with Fox News was found posted on YouTube:

More than 100 Murders Attributed to Illegals released by Obama

Sign up for the iRumorMill.com Alert System - Find out more by clicking here span>